Greetings from the Crown of the continent! My last post summarized surviving day one of a 5-day Smith River Trip as an example of why I believe Springtime may be the most threatening season to our survival, simply because we often are not as prepared as we should be. This trip took place in June, which we consider "Spring" here in Montana. Heavy rain has been non-stop thus far in our journey.

Day two greeted us with more of the same; heavy rain, some wind, and cold temps just above freezing - perfect hypothermia conditions. Everyone in our party was more comfortable thoughpvc poncho or a garbage bag made into a poncho, which made a huge difference in our comfort level. 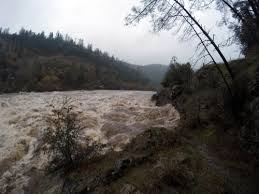 because we were better prepared for it by dressing more appropriately. Those of us that had extra gloves, hats, rain jackets, and other clothing, shared with those that did not. Most everyone also wore a

As we had expected, the river had come way up overnight, transforming this peaceful little river into a raging monster. The river looked like chocolate milk, and there was lot's of debris; logs, entire trees - root wad and all. At one point we pulled the boats over to allow a mass of debris float past us. It was what looked like about a mile of barbed wire fence with dozens of fence posts all wadded up in a big ball just tumbling down the river. This was a very treacherous situation to be in.

Our rafts are setup with the guide in the middle, an angler in the front and an angler in the back. Though considering it pointless, a couple of the anglers tried fishing for a while, only to confirm that fishing would not be productive under these conditions. It was just too muddy and there was so much debris in the water. It got to be kind of scary, and just plain dangerous.

Typically, we don't wear our life vests when on these trips, but we did now, and the guy in front watching for floating debris ahead, the guy in the back was turned around watching for debris floating down on us from behind. The "back currents" in the plunge-pools was so strong it was difficult to row thru. Most of them were great big whirlpools full of logs and other debris. We couldn't take the main current thru these or we would get slammed into the rock walls and pinned or flipped.

Aside from the hazards in the water, we had to try to keep away from the cliffs because the heavy rain was causing rocks of all sizes to tumble down into the river. These cliffs are several hundred feet tall. Even a small pebble falling from those heights would cause lot's of damage to us and/or the boats. At one point, shortly after we passed by, a whole cliff-side broke loose and crashed into the river. If a boat had been under that it would have been "game-over".

Night two was pretty much a repeat of the first night, but our camp was under a heavy canopy of trees, and the rain lightened up just a bit for three or four hours, and we didn't have the volume of wet clothing we had the first day because everyone was better dressed, so we did not need to construct the "smoke hut", we just built the fire up real big. It was still a bit of a challenge to find wood that would burn.

The next morning it was raining just as hard as it ever was, and the river had come up several more feet - much higher than any of us had ever seen. At that point, the outfitter in charge of the trip decided to pack it in and row for the take-out, which was over 30 river miles, which normally takes us two days to cover. We did it in about four hours. According to a guests GPS, we averaged 10.3 miles per hour. That was a very fast boat-ride.

Fortunately, everyone in our party was no worse for the wear, but others were not so lucky. A couple of gals had to be air-lifted out after capsizing their canoe, and an elderly couple crashed their drift boat into a boulder and capsized, killing at least one of the occupants. The demolished boat was still there on the river bank for another year or two; a stark reminder of how treacherous this peaceful little river can become at times.

We, as professionals, were relatively well equipped for this trip, but there was room for improvement. I, personally, added a very large sheet of 6mil plastic and several lawn/garden bags to my boat gearbox, along with extra wool and fleece clothing, gloves, hats, etc for my guests that did not come prepared.I also included a breathable, waterproof survival bivy  Though I did not get really cold in my soaking wet sleeping bag on that trip, it was not comfortable, to say the least. I'm surprised how much more comfortable I am now with that bivy, and kicked myself for not getting one sooner.

I also added more fire starting material to my kit, and two more butane cigar, or "hurricane" lighters, as well as a FULL can of butane to refill them. I make my own fire starter with 1 1/2 inch wide by 1 ft long strips of corrugated cardboard which I roll up tight and tie with twine or dental floss, then soak for a minute in hot melted paraffin wax.

As a whole, the biggest improvement our party could have benefited from would be packing the proper clothing, and making sure it was with us in our own boats, and not packed away on the gear boats.

I am often accused of "over-packing" on most of these trips, but I would rather have it and not need it than need it and not have it. That is really a good policy, especially in the Springtime, which can be the most threatening season of all, to your chances of survival.